Is climate a random walk?

Let's pick up again the discussion between Tamino and me.  He has objected to my use of cumulative sums on the grounds that cumulative sums of random numbers have bad behavior statistically.  He's correct about that statistical point, naturally, which means caution is needed regarding the statistical part of my post on finding a climate normal.

But how concerned should we be as climate scientists?  Crucial to that concern is that climate be, to a fair degree, experiencing random variation.  It isn't, strictly.  As Tamino mentioned, there is certainly a trend in more recent years -- not purely random variation.  His criticism is more one against the cumulative sums method.  As Jim Bouldin mentioned in the comments recently, we do routinely transform variables in order to study topics of scientific interest.  In his case, plants.

I'll start by showing you an illustration of why Tamino is concerned.  This is a plot of the cumulative sum -- of a purely random variable, with uniformly random numbers in the range plus or minus 1 degree.  This is actually about 10 times too large for climate.  So the late period value of 40 really means 4 degrees. 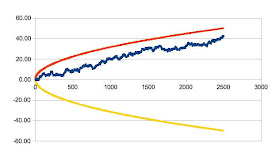 Each tick mark is 1 month, but assumes that each month's random number is completely independent of each other.  That isn't the case, as Tamino has documented.  This curve manages to accumulate its 4 degrees in about 200 years.

The upper and lower curves are growing proportional to the square root of the number of months.  Random walks are known to do this.  We can't tell whether such an accumulation will head for the warming or the cooling side, but we can be confident that over time, the cumulative sum will move away from zero.  I've loaded my spreadsheet for this in Open Office and Excel formats.  I do encourage you to pull one of these down, or write your own, and look at a few dozen examples of what can happen with cumulative sums of random numbers.  As Tamino said, you can find all kinds of interesting results -- that have nothing to do with anything meaningful.

Let's go back to that 4 degree accumulation in 200 years.  That's gargantuan compared to real climate changes.  The 200 years comes out partly because of the nature of randomness used in my spreadsheet, so don't be too wedded to it.  It could easily be more like 2000 years with a better approximation to climate's random nature.  I'll hope that Tamino or one of my more mathematical readers take this part up.  The other thing is, the accumulation is unbounded -- wait long enough and any limit you put, 4 C, 20 C, 100 C, ..., will be passed.  It will take about 25 times as long to pass 20 C warming or cooling, so maybe as fast as 5000 years!?

Regardless, however, of the exact period, the random walk is quite happy to move away from a reference climate by 4 C in a pretty short period.  Ok, long compared to how long I expect to live.  But quite short compared to the 100,000 years or so of an ice age cycle.  Global mean temperatures change by about 5 C in an ice age cycle.  So this 200 (or 2000?) year accumulation of 4 C is enormous, and fast.

But we don't see that in the ice age records.  Temperatures cool by about 5 C going in to an ice age.  It takes a while.  The thing is, we don't see global warmings and coolings of several degrees occurring routinely each few hundred or few thousand years.  We don't see 20 C changes at all.  What we see instead is that there's a more or less smooth cooling going in to an ice age, and a more or less smooth warming coming out of one.  There are occasional large shifts in regional temperatures (the Younger Dryas, for instance, coming out of the last ice age).  But there are never such large temperature shifts as the random walk looks to expect.

The reason is, climate variation is not a purely random process.  This is no surprise, of course, and no surprise to Tamino either.  The climate system has an idea of what its reference temperature is.  That is, if temperatures are a bit higher than normal, it's more likely that the next change will be a cooling.  Not necessarily the next month, due to the autocorrelation that Tamino has mentioned.  But sooner than later.  -- Unless there's something pushing the climate to a new reference temperature.  I'll illustrate this, from data, in a post to follow.  It provides, by the way, a different way to look for a period of 'normal climate'.  The random walk has no idea whether it is currently warmer or cooler than reference, because there is no real reference.

This gives a sense that over long periods (even if we're not exactly sure of what 'long' means -- 200 years in this example) climate isn't really a random walk.

Volcanoes let us see this return to reference temperature over short periods.  When a major volcanic eruption throws a lot of dust in to the upper atmosphere, the earth cools.  This, itself, is highly non-random.  Throw junk into the upper atmosphere, cool the earth.  Never do we see a warming from it.  No surprise there.  What follows is the interesting part.  Over time, the earth warms back up to about where it was before the eruption.  That time is a few years.  If climate were just a random walk, after that eruption the earth would be as likely to cool as warm.  And a few years after the eruption, the earth could just as easily be markedly cooler as back to its normal.  Yet what we see is the earth returns to its pre-eruption temperature.  Those old enough to remember Pinatubo (1991) experienced this fact themselves.

There certainly is randomness to global climate.  If there weren't, we would be able to make perfect climate predictions.  On the other hand, the randomness is limited somehow.  The climate system does have an idea of what temperature it would be at if it weren't being disturbed by something (volcanoes, El Niño, greenhouse gas releases, etc.) and tends to return towards that.

For the discussion between Tamino and me, I'll suggest:
#5 is the almost universal conclusion for scientific discussions.  I'll hope that Tamino or others take up the question of what more realistic noise would tell us about climate as a random walk processes.  I'll take up a different novel approach to climate myself shortly.  Instead of sums, it will be differences.  They're subject to problems, just as sums are, but they're different problems.  If we get to the same conclusions by both methods, we can be more confident of our conclusions.
Robert Grumbine at 09:45
Share